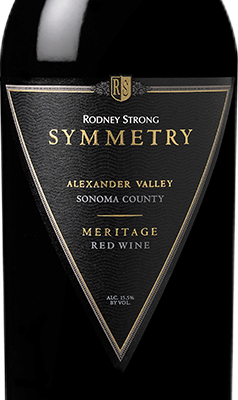 The 2011 Symmetry greets you with an opulent bouquet of blackberries, cassis, and sweet spices. It unfolds on the palate with layers of black fruits, dark chocolate and spice. This mouth-filling wine is rich and silky in texture with a long, lingering finish and the structure for several years in the cellar. Intended to be enjoyable on release, the 2011 Symmetry is destined for evolution in the bottle.

With over 40 years of experience growing classic French grape varieties in Alexander Valley, we select our best Cabernet Sauvignon, Merlot, and other traditional Bordeaux grapes from the hills that overlook the valley, where well-drained rocky soils combine with warm, sunny days and cool nights to provide ideal growing conditions. Select areas within each vineyard are hand harvested individually, fermented separately and aged in the finest French oak barrels. After about six months, each lot is tasted and graded; only the highest graded wines are considered for Symmetry. The blend is then assembled, and the wine is returned to barrels to facilitate flavor integration. The wine is aged an additional 10 to 18 months, before bottling.

The 2011 vintage started off cool and damp with little to no frost. After almost two inches of rain in the month of June, late rains continued until July. The end of the rainy season led to a cool weather pattern for most of the summer, with average high temperatures around 80 degrees during July and August. The heat returned in September, with one six day stretch of temperatures in the 90s, exactly what the vintage needed. We harvested our Malbec between October 13th and 17th, the Cabernet Sauvignon between the 15th and 24th, the Cabernet Franc on the 16th, Merlot on the 17th, and Petit Verdot on the 20th.