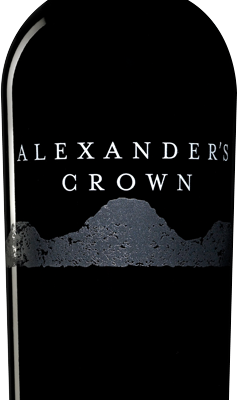 The 2012 Alexanders Crown exhibits ripe flavors of black cherry, plum and violets. The wine is voluptuous, has a rich mouthfeel, soft tannins and a long lingering finish with a touch of mocha. Enjoy this wine now or cellar it for enjoyment in 8 to 10 years. The 2012 vintage started off warm and dry, with little to no frost. By mid-summer people were beginning to whisper about how perfect the growing season was going. Rain-free warm days and cool nights were the rule, with no storms or heat spikes. Situated at the top of a low knoll, the 15 acres of block 1 at Alexanders Crown face in all different directions. However the favored part of the vineyard is the west face, which catches the late afternoon sun. This 5.7 acre sun trap block was picked on October 5th and made up 86% of the finished blend. The remaining 14% of the blend came from Cabernet picked almost two weeks later from the east-facing block, which needed the extra time to ripen, though its only a stones throw away from the west block. Whereas fruit from the western side of block 1 added delicious layers of deep fruit and soft texture to the wine the eastern part of block 1 added structure and acidity to balance.

The Alexander Valley AVA is 22 miles long, ranging in elevation from 150 to 1,500 feet above sea level, and is home to our three single vineyard Cabernet Sauvignon wines. Our winegrowers have found the very best grapes grow on higher elevated western slopes, or as they say, the sweet spots. Spread throughout our three vineyards, weve determined the best blocks are typically located just below the ridge tops with a western facing aspect to capture the full warmth and light of the afternoon sun. In the northernmost hills near our Brothers vineyard, with average growing-season temperatures of 67 degrees, heat dominates, allowing Cabernet Sauvignon to ripen well. In the middle of the valley, Rockaway vineyard, with average temperatures of 62 degrees, balances heat and Pacifi c Ocean cooling breezes  allowing for classic structure development. The even cooler Alexanders Crown vineyard, with average temperatures of 59 degrees in the southern valley, yields more delicate, feminine style Cabernet Sauvignon. In the distance of only 12 short miles, average temperatures change eight degrees among our vineyards during growing season, thereby allowing three very different expressions of Cabernet Sauvignon.

Established in 1971 and recognized as the first vineyard in Alexander Valley to produce a single vineyard Cabernet Sauvignon, Alexanders Crown vineyard is perched on a hill in the south of the Alexander Valley just west of Jimtown. Encompassing 63 acres, the vineyard is in the first part of the valley to feel cool Pacific breezes each afternoon. We use Block 1, the top 15 acres of well drained red volcanic soil to craft this wine, resulting in intensely flavored Cabernet Sauvignon.