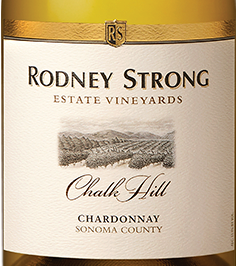 Barrel fermentation in new and seasoned French oak added toasty vanilla and spice complexities. During the twelve months of barrel aging, we regularly stirred the "lees" in barrel, which imparts an elegant fullness and creamy texture on the palate. In the glass, the wine is both creamy and crisp, with flavors of golden pear, vanilla, Meyer lemon and a hint of minerality on the long finish. Enjoy over the next one to three years with soft cheeses, fresh crab or roasted pork loin.

Enjoy over the next one to three years with a gourmet cheese plate, creamy vegetable
pasta or grilled halibut.

In 1965, our founder Rod Strong was the first to plant Chardonnay in what would later be recognized as the Chalk Hill American Viticultural Area (AVA), established officially in 1983. He recognized the region as distinct from the rest of Russian River Valley for its unique, volcanically-derived, chalky white ash soils, which impart a subtle mineral character to wines grown there.

Early winter showers, with a good amount of rain, were followed by a, dry spring. Alternating overcast days and heat waves continued through spring and summer, with a warm July and August. Overcast days in mid to late August, kept the mornings cool preserving acidity and warm daytime temperatures led to perfectly ripe fruit. Our Chalk Hill Chardonnay was harvested September 1st through September 12th under ideal conditions