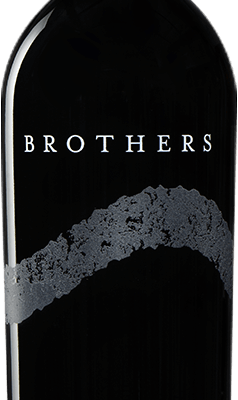 The 2014 Brothers is a deeply rich wine with complex dark fruit flavors. The wine is voluptuous and is bursting with blackberry, plum and wonderful chocolate notes followed by a round and seductive mid-palate and a long lingering finish. Enjoy this wine now or cellar it for enjoyment in 8 to 10 years.

The Alexander Valley AVA is 22 miles long, ranging in elevation from 150 to 1500 feet above sea level, and is home to our three single vineyard Cabernet Sauvignon wines. Our winegrowers have found the very best grapes grow on higher elevated western slopes, or as they say, the “sweet spots”. Spread throughout our three vineyards, we’ve determined the best blocks are typically located just below the ridge tops with a western facing aspect to capture the full warmth and light of the afternoon sun. In the northernmost hills near our Brothers vineyard, with average growing-season temperatures of 67 degrees, heat dominates, allowing Cabernet Sauvignon to ripen well. In the middle of the valley, Rockaway vineyard, with average temperatures of 62 degrees, balances heat and Pacific Ocean cooling breezes – allowing for classic structure development. The even cooler Alexander’s Crown vineyard, with average temperatures of 59 degrees in the southern valley, yields more delicate, “feminine” style Cabernet Sauvignon. In the distance of only 12 short miles, average temperatures change eight degrees among our vineyards during growing season, thereby allowing three very different expressions of Cabernet Sauvignon.

In the hills to the east of the small town of Cloverdale, Brothers spans 135 acres, nearly all planted to Cabernet Sauvignon with a small amount of Malbec at the top. The vineyard is on well-drained loam underlain by sandstone, shale, and ancient greenstone. Its elevations, surpassing 1,000 feet, and its primarily western aspect perfectly situate the vines to capture the full warmth and light of the afternoon sun, ripening Cabernet well into the chocolate and black fruit profi le, with exceptional richness.